Indledning
The bad relationship between the police in the US and the black society does not seem to get better anytime soon.

The year is 2020, and horrible stories about innocent members of the black society getting killed for no reason, keeps coming.

The fatal death of the black man George Floyd, as the most recent one. Another death which caused a lot of attention in the US, was the death of the young black teenager Michael Brown. The following death went on to cause the “Ferguson riots”.

It still lives today, because of the mistreatment the young black men keep getting. Driving while black is a perfect example of different treatment between races.

Snow on the license plate, while it was snowing. Problems with the lights, even though they worked perfectly fine, and so on. It is therefore clear that the police are treating the black men, different from the rest of the population.

The black society gets a “bad” relationship to the police by a very young age. Their parents often feel the responsibility to teach their kids, at a very young age, what to do when meeting a police officer. 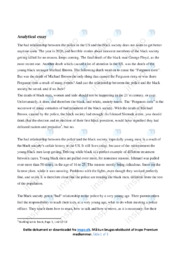