Indledning
The past VS. the future. Can America move on from its slavery past, to get a brighter black future? In the US today many black protesters are fighting for a future where everyone despite skin color can be equal.

Pharrell Williams (P.W.) is a black protester who fights for the human rights of black people. P.W. is also a highly respected singer, producer, and entrepreneur. P.W. wrote the essay “America's Past and Present Are Racist.

We Deserve A Black Future”. The essay was published in Time Magazine in August 2020. The message is that the Americans' past is the cause of racism today.

Uddrag
P.W. is using different types of arguments like the cause, the classification, and the comparative argument.

First on is the cause argument where P.W. argues that the racism we experience in American society today is caused by the past where black people were seen as manpower and not as equal human beings.

The classification argument is used to say that something applies to a majority, which is the black people in this case. It is seen when P.W. writes about how difficult it is for black people to achieve the American Dream.

The classification argument creates a diversity between black and white Americans. The comparative argument is used when P.W. is comparing the past and the present for example when the Boston Teaparty is compared to what happened to George Floyd on May 25th, 2020.

The mixture of argumentation shows that P.W. has a good argumentation, because he can make different types of arguments and that makes it more interesting for the readers. 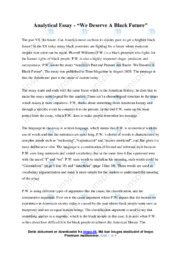