Indledning
Hello everyone, my name is Laura xx , I’m 19 years old and I’m a student here on the Johns Hopkins University in Baltimore. I’m here today, to talk to you about how it’s going for The American Dream in our America.

One thing The American Dream has always been about, is us wanting an equal life with a for everyone no matter what social and economic background you have.

This dream was attractive to many people in many different countries, so that made people decide to migrate to America. Despite the mix of cultures, races, religions and languages, it all went relatively smooth for many years .

But how can the inequality get so big and The American Dream change so fast in America, if it is the opposite we will achieve?

Americans find, the three most important elements in The American dream as, “starting a family”, “owning a home” and “getting a fulfilling career” . But still is less than 20% of the Americans say they’re living the American dream . Since trump became the president of the united states of America, everything got more unbalanced.

Since The American dream is also about a higher level of social justice, I have wondered a little about how there can be so much inequality. The question is whether Trump weighs success, wages and self-image above social justice and the dream of everyone having a good life.

Donald Trump is a believer in The American Dream, but since he came to power there has been more crime associated with people has been given worse individual life opportunities. Trump has focused more on pursuing aggressive immigration policy and making America a big debtor. 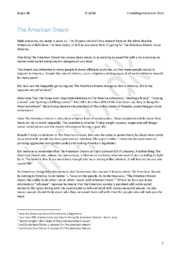 Manuscript to the speech about the American…

Manuscript to speech about the American Dream

Obama's speech on the 'American Dream' |…

The American Dream Thrives under a Recession…