Indledning
Talking is one of the most important things to do in life. If one does not speak, then no one will have a conversation and it’s going to be very difficult for the individual.

Here we can talk about Neil Gaiman’s short story “Cinnamon” from 2009, a princess named Cinnamon who did not talk. So, her parents offered a lot of people to try and make her talk until one day a tiger came and then everything changed.

Uddrag
Neil Gaiman uses concepts that define a fairy tale. As an example, he uses the number three indirect in the story where the tiger says how Cinnamon feels.

In these sentences, Neil Gaiman uses the number three to describe how she feels until he gets to the third, which is love. Usually, it's three supernatural wishes but the tiger describes how Cinnamon feels.

The style of writing in the short story is in a third-person view. The language is simple and normal, so it’s easy to follow up. It’s very easy to read because it’s a fairy tale and it’s for children.

Neil Gaiman uses similes to describe something. “He was huge and fierce, a nightmare in black and orange, and he moved like a god through the world; which is how tigers move”.

In this line, he describes what the tiger looks like and compares it to a god through the world. He also uses metaphor in the short story where he uses it to innovate and expand the language and gives new experiences to the reader. 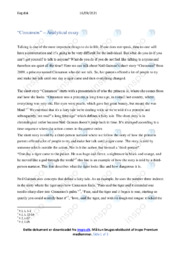