Opgavebeskrivelse
Text 1:
New York can be anything you want it to be. It’s why countless people have pinned their dreams on the place, thrown caution to the wind and shown up on its doorstep. If you like a day filled with culture, start with a look at some Tseng Kwong Chi photographs celebrating East Village creativity in the eighties at the Paul Kasmin gallery, before ducking through Central Park to the Metropolitan Museum of Art for the current Jap7anese art exhibition. Round out your afternoon with some off beat/experimental theater at the Abrons Art Center on the Lower East Side.

Text 2:
New York is the most populous city in the United States of America and the center of the New York Metropolitan Area, which is one of the most populous metropolitan areas in the world. A global power city, New York exerts a significant impact upon commerce, finance, media, art, fashion, research, technology, education, and entertainment. Housing a Census-estimated 2011 population of 8,244,910 distributed over a land area of just 305 square miles (790 km2), New York is the most densely populated major city in the United States.

Uddrag
If we start out with looking at the most common language registers in writing, and start out with looking at the first text. We can already conclude that the formality level isn’t formal in the first line, because there is a contraction after the first sentence (It´s why…), but also because it isn’t written in a third person point of view (anything you want…) with the use of “you” instead of “people” for example.

This is one of the sentences that shows us the formality level with both long sentences and semi-complex words like “significant”.
The text is wrote in a third person point of view, as there isn’t any I, you, we or us in the text. When it´s wrote in third person, makes it more impersonal and therefore more formal. 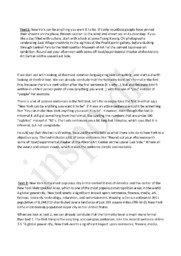