Indledning
Who is responsible for the health consequences of 9/11 victims? And does the responsibility of the injured responders and civilians ever end? 9/11 was the worst day in newer American history. The day where almost 3000 innocent people were killed by a tragic terror attack.

The massive destruction left behind by the terrorist attack, was a fierce battle, both for the survivors, the relatives, and of course New York's firefighters and police, who had to be heroes, even though their world was now in ruins.

A fund was created in the months following the attacks and was initially active for two years, paying more than $7 billion in benefits to people who died or were injured in the immediate aftermath. Three times the economic compensation was expanded, but it never became permanently.

Today, 18 years after the terror attack, an increase in serious illnesses and deaths still continues. Now the debate is about whether financial compensation should continue permanently or whether compensation should come to an end. In Jon Stewart's ‘Speech to Congress’2 from June 11. 2019, exactly this topic is discussed.

Uddrag
In Jon Stewart’s speech ‘Speech to Congress’, Jon Stewart is speaking to a Congress comprised of politicians. He speaks for the responders’ case and tries to persuade the Congress about making the financial help permanently. In the video of the speech, Stewart seems genuinely touched and frustrated by the situation.

His body language has a huge impact on his ethos. He appears reliable and genuine, which has a positive impact on how strong ethos appears. Besides of that, he is also reliable in the political game, since he has previously dealt with politics in his position as a political commentator.

Stewart’s language is informal and down-to-earth, he does not make use of hypotactic structure to appear academic, - He just wants to get out with his points, so everybody understands them. 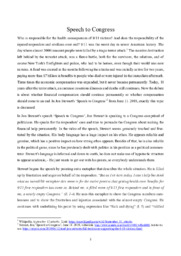 The North English children are the victims,…

Poverty and the health care system |…

The Dangers of Snapchat on Mental Health…

Mental health is the strongest taboo |…

Racism and its consequences | Speech |…

The psychological consequences of the military |…

Consequences of lockdown and isolation | Engelsk…