Explain which internal and external factors have had an impact on Søstrene Grenes Holding APS’s financial development:

When looking into the financial development of Søstrene Grene, there are some internal and external factors that have contributed positively to their growth of around 50%.

One of the internal factors has contributed positively to this growth is their expansion of stores, which has increased ten times throughout the years.

Analyse how the internal and external factors have influenced the development in the index figures for earnings and asset use efficiency (capital adjustment) from 2015/16 to 2017/18. The key figures can be found in Appendix 1 of the Excel file:

Uddrag
The return on equity shows that the owners have achieved a return on the capital that they have invested in the company.

The actual equity has a larger percentage increase from 2016/17 to 2017/18 and leads to the large increase in return on equity. 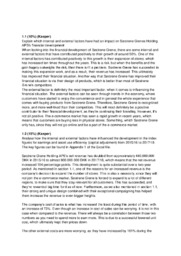