Indledning
The short story I have been analysing is “May the Best Man Win” written by Kit de Waal. The novelle begins in medias res with the arrival of four men at a pub, it takes place in a pub called The Carpenter’s Arms in Birmingham in England.

Uddrag
Patti and Eddie flirts through the evening and it seems like they like each other. The setting is a pub in Birmingham, in England, called The Carpenters Arms. The event take place on a Saturday night in December 1981.

The social setting includes racial conflicts. My analyse of the short story shows that it follows a linear, chronological plot structure. 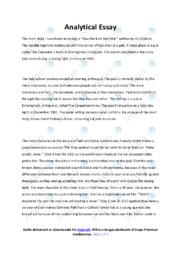