Indledning
In the graphic story “Blankets” by Craig Thompson, a young man is conflicted about a memory of the magic of childishness being taken away by his parents.

He is reminded of the scenario when his girlfriend and he venture into the forest to pass the time. The contrast in the illustrations as well as the use of panels nurture a feeling of romance and young love, as the couple ponders on the universe.

Uddrag
. When Thompson and his brother learned the truth, they are visually disappointed. Thompson illustrates this, by making the children have lively expressions on their faces, run down the stairs or jump around when they are chasing the sparks.

The first panel of page 64 is a silent panel, which shows them earthbound, with contemplating, disappointed facial expressions. Ignorance is bliss, as Raina’s quote, empowered by the Thompson’s detail in movement, shows how learning the truth can sometimes take away the ‘magic’ of innocence, and how it has an effect through ones entire life, as Thompson still remembers the scenario.

Thompson’s use of panels helps show the love between the two characters. This is clear on page 68-69. Where each of the couple plucks an eyelash, and mutually lean in for a kiss.

The lack of speech bubbles turns the reader’s focus to their passion, and highlights the isolation, remoteness and silence of the forest in which they lie. The width, detail, and silence in the panels set a slow rhythm.

Thompson spreading a single action, the kiss, across more than an entire page, emphasizes this. This makes it easier to imagine exactly how it went down - in a heartfelt, romantic way. It forces the reader to know why what is happening, based off knowledge that has already been gained.

The close-up on their lips also makes for a suspenseful focus point. It is easy for the reader to know what is going on, even before they actually kiss, and to release the suspension, the last shot, is from a perspective farther away. 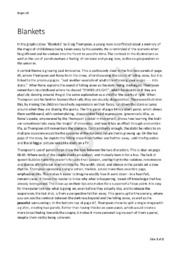 'Let’s Go to the Videotape' by Fiona…

How Much Technology Should You Let Your…

‘The Awakening of Colin Kaepernick’ by John…

Stand by me | Film analysis

'The Curious Incident of The Dog in…