Indledning
Jessica Watson is a brave girl, who won an Award. She is born in 1993. Jessica spent years on the family houseboat, and were inspired by sailing story at the age of 12.

Uddrag
While she were on her boat, she had a daily blog, were she posted many pictures and histories from her trip. Millions followed her, and she became ‘’famous’’ in few days.

After she became ‘’famous’’ because of her blog, she started on YouTube. Jessica began to make videos about her life and how it goes. 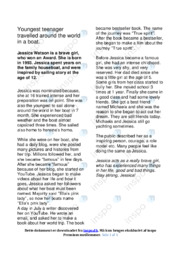