Indledning
When surfing the web as most of us usually do daily, it is almost impossible not to come across the heavily discussed topic “Brexit”.

The United Kingdom joined the European community of nations in 1975 and some few decades later when David Cameron, the former prime minister promised a national referendum on the European Union membership, became the first country to ever leave it with the results of the vote being 52% who voted to leave and 48% who voted to remain.

Uddrag
The UK will most likely have a severe labour shortage as the workforce growth rate is expected to fall from 9% in the ten years to 2015 to 2.4% six years after Britain leaves the EU .

This will result in the number of workers entering employment falling behind the rate of population growth for the first time in half a century . The people in the United Kingdom to be mostly affected by this is their youth despite them voting strongly against it.

Socially this will have great impacts on the youth of the country, as those who have grown up in the United Kingdom as a part of the European Union has enjoyed the benefits of easy travel and the huge opportunities when it comes to studying and jobs.

The United Kingdom has over the past decade seen a 50% increase in the number of UK students studying abroad. 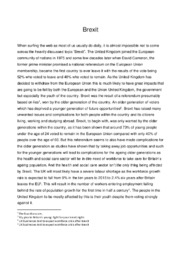