Indledning
“The help” started with a novel written by Kathryn Stockett in 2009. The movie is based on the novel. The film takes place in Jackson in Missisipi, during the early 1960's. The movie is also known as “Niceville” and was instructed by Tate Taylor.

Uddrag
However, this film is mainly based on a woman's view and focusing on the women in society. The great focus is thus placed on the women's world between black maids and white women who have hired them.

The first thing you notice is the way that black women are "exploited" for housework and they are all presented as maids.

The job opportunities at that time for black women have only been able to be a maid. Fortunately, some of the personalities in the film also seem to like their work as a maid.

One of the major personalities we meet is Skeeter. Ms. Skeeter was raised by a black maid herself as a child. All of her memories from her childhood was together with her maid Constantine. 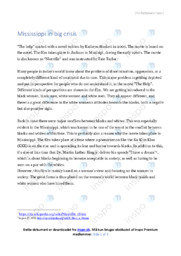