Indledning
In Muli Amaye’s short story “Streamlining”, she takes us through a short story about how a parent leaving home affects the children, who are involved, and also how some parents treat their children differently because of their gender.

“Streamlining” reflects on, how the abandonment of a parent tears the connection between the child and the parent over.

In this case, the relationship between the protagonist’s brother and mother gets stronger after the abandonment of the father, and it continues into adulthood. Meanwhile the protagonist’s support in the family is gone.

The short story is told through the perspective of a woman, who has been treated differently by her mother because she is a woman. This psychological terror makes her feel like a little child towards her.

Uddrag
Jocie’s brother, Brandon, is a teenager in a thirty-one-year-old body - Seriously, he just said that - like he’s a teenager from the ghetto! For God’s sake, he’s thirty-one. Brandon has no interest in things that matter.

The only time he has an interest in anything, is when he wants to shag some white girl - As if he actually knew things that mattered, when the truth was that he’d half-listened to a conversation with some white girl into hippy shit he wanted to shag.

In comparison to Jocie, Brandon has no trouble visiting mother, because he’s never held accountable for the things he does - Brandon never seemed to worry about visiting Mother. Took it all in his stride.

That was because Mother doted on him. He couldn’t do anything wrong. If he turned up in a creased shirt, it was his girlfriend’s fault. If his hair wasn’t neat, it was the barber’s fault.

If he had a hangover, it was his mates’ fault. The mother relinquishes Brandon all responsibility as she has always done, and the reason for this, is because he’s a man.

- Maybe she should resent her brother, but she couldn’t. It wasn’t his fault he’d been born with a penis. In the short story, Brandon is being portrayed as irresponsible and selfish - Her brother wasn’t a bad person. 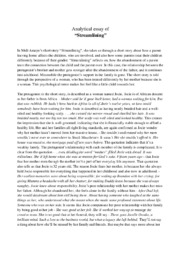