Indledning
Over the last few decades, with global spread and use of English, researchers have shown an increased interest in English as a Lingua Franca.

Uddrag
An American Dictionary of the English Language took 18 years to complete and yet the internet is creating a similar language evolution, but at a much faster pace.

People are increasingly using English to communicate with other non-native speakers, especially on the internet where less attention is paid to correct grammar and spelling and the users don't have to worry about their accent sounding silly or incomprehensible.

Like everything else in the world, English becoming a Lingua Franca has its pros and cons. Some might think that the pros surpass the cons, due to the fact that nothing is being done to stop the evolution of the English language’s globalisation.

Having a common language allows people from all over the world to form friendships and connect. We can share our cultures and learn from each other, both the good and the bad.

To a certain extent, this keeps the world a peaceful and war free place. An immense benefit of English becoming a Lingua Franca, is that that with English you can become part of a wider conversation, to help solve global problems. 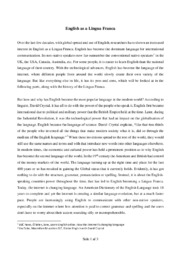