Uddrag
- The 12 men on death row are locked in their cells for 23 hours a day, they are given a single hour’s recreation

- Frederick Bear, he killed a mother and her young daughter, he has a girlfriend, Susan. There are 15 levels to death row, Bell are on stage 13. He has been here 7 years.

- The last man to be given a lethal injection that Indiana State prison was Matthew Eric Wrinkles. He killed his wife and two relatives. He spends 14 years on death row. On the night of December, the 11th 2009 Wrinkles was put to death. 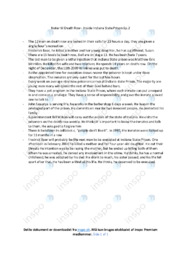